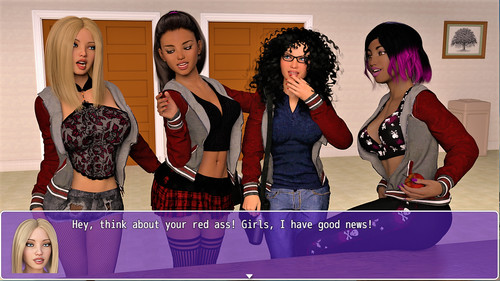 Angelica Origins Remake, is a story about Angelica and her origins… Origins of what? The origins of what she will be in the future…
You will follow her story from when everything will start to change in her life: she’s a common girl in her last year of high school, she likes to study, to use pc, watching movie and tv series. She lives with Rita, her mother. She doesn’t know much about her father and she has a boyfriend named Simone. Her best friend in high school is Alessia and other friends are Erika and Larissa. All these girls are in the same class.
Gameplay:
You will make choices for her, in every situations. This game don’t have different paths but it has different endings. Your choices will decide how much Angelica will be involved in some… particular events… This will affect her relationships with other characters, how much she’s changing herself and her possibilities in future events and choiches.
During the playing you will gain some points: Lust points, Good girl points and Bad Girl points. These points are important to unlock and to do future choices.
I don’t want to create a long and big game. I’m trying to create a series of episodes with different endings each one. Only for the endings you will follow different paths. The endings will be:
1- Good Ending: This is the normal ending, but it’s a incomplete ending.
2- Bad Ending: This is more a game over, but this doesn’t mean less funny or less interesting…)
3- True Ending: This is the true ending that it will be linked with next episodes. To reach the perfect ending you’ll need the right mix of points and to take the right choices at the end of the episode.

– 150+ NEW IMAGES;
– 2 NEW ANIMATIONS;
– 1 NEW CHARACTER;
– 2000+ LINES OF DIALOGUES;
– NEW “LOVE” POINTS;
– DAY 1: IMPROVED TEXT (Edited and fixed by Spushkin).
– Points Error: In your first meeting with Rosanna, if you choose not to help her, you’ll gain 1 Bad girl point, as it should be, and not 2.
– I modified the background of the text box (less transparent) and the outline of the fonts (larger borders) to facilitate the reading of the dialogues. To notice this change you have to restart a new game.